Schwarzbier, BJCP category (8 B), is one of my favorite German Lager styles. Once I setup appliances to control temperature, I was able to safely store a carboy, even in the heat of the New Mexico summer. I started with the base recipe from Brewing Classic Styles, a must have recipe book. It's the equivalent of David Jauss' essays for writers. I always make small revisions each time I brew this one. All brews have some problems along the way, and this one was a low mash temperature, so I ended up with a lower original gravity than I wanted. I also tend to go a little heavy on the roasty character, which is not very appropriate for the style, but it's the way I like it. In the end, no one is complaining when they go out to the garage to tap a pint. 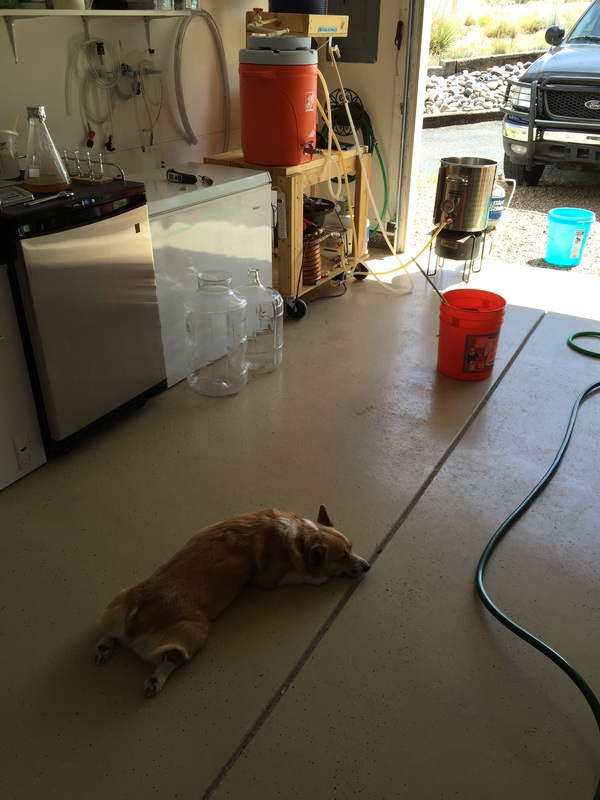 Excerpt of a longer essay on the history of the Old Order Amish,
"And Be Not Conformed to This World: The Amish Struggle with Public Education"

In 1986 four teenage boys, ages thirteen to sixteen, sped down the back roads of Lancaster County, Pennsylvania in a futile effort to outrun the police cruiser following close behind. During the night, they vandalized a series of buildings, including an Amish community one-room school. The boys broke the windows, defaced the interior, and looted the school supplies with no care or concern for the possible consequences. When the four delinquents were arrested by the police and convicted by the courts, they received only a lenient sentence. The Amish victims of the senseless destruction did not seek punishment or retribution; they only wanted a small compensation for the damages to their private community schoolhouse. Amish families are interspersed throughout the suburban and rural areas of Lancaster County and often come into conflict with a community that does not treat the world with the same discipline. The Amish adhere to a set of traditional beliefs that come directly from their interpretation of the Bible.

Lancaster County, Pennsylvania is home of a large portion of the Amish community in the United States. Other settlements can be found in Ohio, Iowa, Indiana, and several other areas of the country. The Amish are a widely misunderstood group of people who choose to separate themselves from popular culture and technology. Their Christian denomination teaches them to avoid anything that would foster vanity or ego. Individual achievement and excessive personal pride are believed to be contrary to the teachings of the Bible. Amish school children are taught the acronym JOY, “Jesus is first, you are last, and others are in between.” A critically important aspect of the Amish culture is solidarity of the family unit. Telephones, vehicles, and even higher education allow for the separation of families and dilute traditional values. These simple, non-materialistic ways of the Amish people often do not agree with government regulation. Taxation, social security, and traffic regulations have all been challenges for Amish beliefs. In most cases, the Amish community willingly complies with state and federal legislation; even in the case of government programs that they do not participate in. The Amish people come from a long history of religious persecution and martyrdom, and survival among oppressive circumstances was nothing new to the Anabaptists ancestors of the twentieth century.

The Amish church evolved from the Anabaptists. In 1516, Martin Luther inspired masses with his denouncement of the corruption from the Catholic Church. He declared, “I seek salvation of souls and not the contents of purse.” Others followed Luther’s inspiration. Menno Simons (ca 1496-1561), the Dutch leader of the radical reformation, was baptized and ordained to the Obbinite ministry by Obbie Philips. The Anabaptists branch of the Protestants believed that baptism should only occur when a person is old enough to understand the scripture and make a knowledgeable decision to accept the teachings of the church. The former Obbinites, and followers of Menno Simons became known as the Mennonites. Challenged by the Anabaptist practices, the Catholic Church launched a campaign of mass persecution against all Anabaptist groups. The city of Bern, Switzerland exiled the Mennonites and other Anabaptists, forcing the religious groups to move out to the Rhine River valleys of the French Alsace, the Palatinate, and Luxemburg to farm the fertile land. In the French Alsace area, church schism created a divide within the Mennonites. Jakob Amman, a tailor from Bern, Switzerland, accused Mennonite church leaders of slipping from the Anabaptist traditions. He lobbied for more frequent observance of communion and advocated more restrictive rules concerning shunning. However, Amman was not alone in his dissatisfaction of the Mennonite practices. His outspoken views and charismatic ways had a growing following. Other congregations grew concerned with the controversy being caused by the young church leader. Amman’s views led to a heated debate with Swiss elder, Hans Reist. Reist did not share Amman’s opinion on literally avoiding or ignoring those who committed a sin. Angered by Reist’s disregard for his concerns, Amman excommunicated him. Those who believed Amman was a true reformer for the Anabaptists became known as the “ammansch,” later named the Amish.
​
Religious persecution of the Anabaptist groups continued to force them to migrate further outside of Europe to Russia, Canada, and the future territory of the United States of America. William Penn, a Quaker from Pennsylvania, encouraged Anabaptist groups to settle in the new country. Between 1717 and 1750, approximately five hundred Amish immigrated to North America for freedom from religious persecution. The French and Indian wars slowed the immigration movement until the Napoleonic Era. From 1804 to Napoleon’s defeat, the Amish and Mennonite leaders made several attempts to petition the Emperor for exemption from the requirement of mandatory military duties, but all attempts were ignored and as a result, a second wave of Amish movement came to United States of America between 1817 and 1861. The areas of Philadelphia and Lancaster County became the first Amish settlements in North America. Lancaster would become known as the oldest of the remaining Amish settlements in America. The Pennsylvania Amish were known as the “Pennsylvania Dutch.” The common title was mistakenly translated from the German word Duetch, whose literal meaning is “German.”

Even among the religious freedom ideology of the Americans, the Amish people were challenged to conform to the government’s wishes. Their resistance to sympathize with the rebellion came from traditions that taught they were to obey the government as long as it did not violate Christian morals. As early as the American Revolution, the Amish faced political conflict with their beliefs. Many Amish were accused of being sympathetic toward the British and branded as “Tories.” In Berks County, Isaac Kauffman was fined half of his land and imprisoned from 1779 to the end of the war for refusing to give up his horse to a rebel soldier.

After the founding fathers created an independent nation, Amish communities lived comfortably among society. However, disagreements with the government surfaced primarily during times of war. Major conflicts such as the War of 1812 and Civil War, challenged the Amish resolve and their pacifism when they were directed to serve in a military capacity. At the turn of the century, The Great War brought about the first rough form of a conscientious objector program. Abuse was common for the Amish drafted in the military under conscientious objector status, and military surveillance was routinely conducted of the “pro-German” people.
...